Dunn does the double with his victory at Benton Hall 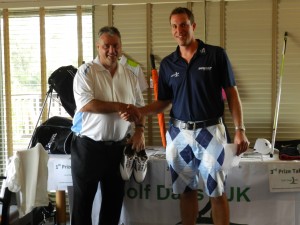 Benton Hall hosted the seventh event of the Golf Days UK Essex Tour where players aim to post the best five Stableford scores over the year. The course was in great condition but the tricky layout of this well thought out course proved a tough test for the players on the day. As a result only three players made scores in the thirties. Rob Turner and Bill O’Donnavan both posted scores of 30 points so it had to be decided by count back. Bill scored 14 on the back nine and took the third spot while Rob claimed the runner up prize with his back nine of 17 points. The winner was Stock Brook Manor member John Dunn with 32 points off his 3/4 handicap of 13. John who claimed his second straight victory plotted his way round the course keeping the ball on the fairway as he did so well last month at Five Lakes. This strategy also helped him take the longest drive award on the 10th hole with his 198 yard effort being one of the only ones to make the fairway.

The nearest the pin prize was claimed by Dave Roth for his shot on the Par 3, 6th hole. Following the Benton Hall event the overall tour leaderboard sees a few changes. Nigel Goude remains cemented at the top with his best 5 scores totalling 161 points but Dave Parry jumps into the second spot with his fifth round giving him 149 points in total. Craig Warren just nips in front of Dave Roth to take third by a point with his score of 143 points. With 3 rounds still to go there is still so much that could happen in the Race to Stoke Park. For the current overall leaderboard on the tour click on the link below.

Runner Up Rob Turner with his drive down the 9th

The next event on the Race to Stoke Park is Sunday 23rd September at Blakes Golf Club with tee times from 1pm. Sign up by phoning 01603 505533 or click here to sign up online.